Equipping YOU for life-long health and wellness, and a closer walk with God! yourteam@equipped4more.com
0 Items

The Real Measure of a Woman 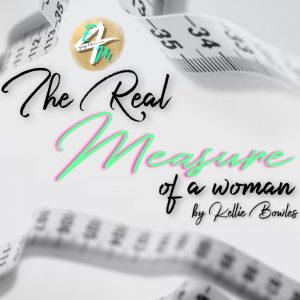 “Hey sweet friends! If you’ve ever wondered how you truly “measure up“ on your weight loss journey, Kellie has a bold word for you this week in her blog post. She is transparent! She is full of truth, and adds the humor we need to keep going everyday! So if the scale in your bathroom is how you’ve been judging your success, read on! It’s time for new perspective! It’s time you learned the Real Measure of a Woman!”

According to Webster’s Dictionary, a scale is defined as an instrument or machine for weighing.  According to Kellie Bowles, a scale is a critical, panic inducing nemesis that is required to track your weight loss or gain. I’m sure it’s obvious that I’m not totally in love with my scale. I take that back. I love my scale when it shows I’ve lost weight. I hate it when it tells me the opposite.

This week has been a rough one for me. I know better than to do a mid-week weigh-in to check my progress. Yet, every Wednesday, I torture myself and step on that blasted beast. If that scale doesn’t show that I’ve lost five pounds, I immediately feel like a failure. I know! Five pounds in a few days is a ridiculous goal! I haven’t lost five pounds in one week ever! But, my brain continually sets these insane personal goals, knowing I will NEVER reach them. It’s self-sabotage, plain and simple.

I know, I know. This post is starting off rather dark. Frankly, this is how I’ve felt this week. It’s not been pretty. BUT GOD! That phrase keeps repeating every week because He keeps revealing the strongholds in my life and keeps breaking them down! HALLELUJAH!

That scale has always been my measure of self-worth. As I’ve said before, this battle with my weight started a long time ago. The scale has been an effective weapon for satan against me. It’s told me how ugly, fat, disgusting, useless and unwanted that I am. Oh man, typing out those words and letting you see them; it’s bringing a fresh wave of tears. I have never really had positive thoughts about myself and I’m ashamed to say to that. Even though I accepted Jesus as my Savior and have lived for Him for the past 25 years, these thoughts have been pervasive. How can I continue to think these things, knowing that He gave EVERYTHING for me? I can’t and that is what He revealed to me this week.

The real measure of a woman is found in the value Jesus gives her, not in her weight. Let me tell you something, God loves the women He has created! You can read interaction after interaction that Jesus had with women in the Bible that clearly show His respect and love for them! He healed them, like the crippled woman in Luke 13, and the woman with the issue of blood in Luke 8. He raised their sons from the dead, like the widow from Nain in Luke 7.  He restored their dignity, like the woman caught in adultery that was about to be stoned in John 8. He declared their value in front of a group of men who inwardly despised and degraded them, like Mary in Matthew 26.

Most importantly, He died for us! He suffered greatly, was beaten, tortured and spat upon for us! Oh how great is His love! That love is enough. Despite all the lies and negative words I’ve heard throughout my life, whether spoken by my own lips or through someone else’s, they are not the truth. Who Jesus says I am is the only truth. And finally, thankfully, I am declaring that over myself. No matter what the scale says on Friday, it doesn’t matter. My measuring rod is found in the blood soaked pages of the Word of God. And finally, I’ve put that scale where it belongs – under my feet, both literally and spiritually.

The time is now to join E4M. Your day of overcoming is about to begin and this is the first step! Join us! You will be so glad you did!